Chamber music in the Polish mountains…

Heading to Poland for a special night of chamber music with the amazing Alicja Śmietana & friends in the beautiful Dworek Gościnny in Szczawnica. And we are sharing the bill with one of Poland’s most famous mime-artists!

BBC Proms with Nigel Kennedy, members of the Orchestra of Life and Palestine Strings

Honoured to have been a part of this unique and historic BBC Proms concert at the Royal Albert Hall on 8 August – a never-before-heard rendition of Vivaldi’s Four Seasons featuring jazz, free improv and Arabic-inspired link sections with the very talented members of the Palestine Strings (ages only 13-23!).

Four and five star reviews rolling in from The Independent, The Guardian and The Times among others. Go Team! X

Excerpts from the concert can be seen here.

‘Orchestra of Life’ Strings in Jaworki!

Following our ‘surprise’ appearance last night performing Czardas with the incredible Nigel Kennedy and his Band at Dworek Gościnny, Szczawnica, the Orchestra of Life Strings take the stage tonight at Muzyczna Owczarnia, Jaworki!

Program includes my arrangement of Vaughan-Williams’ ‘The Lark Ascending’ for solo violin and string orchestra. 🙂

‘Orchestra of Life’ strings – a very special concert in Krakow 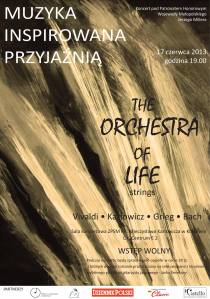 Honoured to be playing in a very special concert in Krakow on 17 June – ‘Music Inspired by Friendship’.
This concert features members of the original Orchestra of Life strings founded by Nigel Kennedy in 2010, who accompanied him on extensive tours across Germany, UK, Poland and Switzerland.

Funds raised will go towards medical treatment for the great Polish jazz guitarist and our dear friend Jarek Śmietana. If you are anywhere near Krakow please come along.

Last night I was lucky enough to perform Prokofiev’s Violin Concerto no.1 (mvts 2 & 3) with a fantastic orchestra formed for the finals of the International Space Time Concerto Competition in Newcastle, Australia. And as a bonus, I won my category of the competition!! 🙂

Fun times. Congrats to the other finalists and category winners and huge thanks to all involved.

SO excited to be on holiday back home in Sydney!!!

Had an awesome night playing at Kinetic Jazz 2012 (works by Richard Savery).

Also pumped to be sitting in with the brilliant Sydney Symphony Orchestra for the Finals of the Sydney International Piano competition and a little later this month, the premiere of Carl Vine’s Piano Concerto no. 2 at the Opera House! Nothing quite like playing at home. 🙂

Back on the road for January with Nigel Kennedy and the Orchestra of Life for a tour across the UK, including Cardiff and Edinburgh among others! Program featuring Vivaldi: Four Seasons and Kennedy: Four Elements

NYE in Vienna… Oh, and a world record!

Performing at the Vienna Konzerthaus on New Years Eve as part of the ensemble for The Igudes­man & Joo UNICEF World Record of the Most Danc­ing Violinists! And a very good cause. Congrats all round!

Straight back onto the road for a month-long tour of Germany with Nigel Kennedy and the Orchestra of Life. Featuring Vivaldi: The Four Seasons and Kennedy: The Four Elements. 22 concerts in November, bring it on!

A little behind-the-scenes footage at the beginning of this:

‘The Carnival’ at Melbourne Fringe Festival

I will be doing some fire eating/taming as well as playing violin whilst flying. 🙂 Come on down!

An interview I did with Red Bennies:

Premiere of ‘Magdalene’ with the Dutch National Ballet

Priveleged to be performing tonight at Het Muziektheater, Amsterdam as guest musician with the Dutch National Ballet for the premiere of the opera-ballet ‘Magdalene’, composed by Chloé Charody, libretto by Malcolm Rock and choreographed by Remi Wortmeyer.

‘The Carnival’ on London’s West End