Back on the road for January with Nigel Kennedy and the Orchestra of Life for a tour across the UK, including Cardiff and Edinburgh among others! Program featuring Vivaldi: Four Seasons and Kennedy: Four Elements

Straight back onto the road for a month-long tour of Germany with Nigel Kennedy and the Orchestra of Life. Featuring Vivaldi: The Four Seasons and Kennedy: The Four Elements. 22 concerts in November, bring it on! 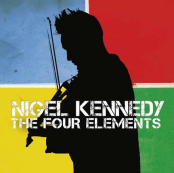 Heading into the AMAZING Hookend Studios for the recording of Nigel Kennedy’s new ‘Four Elements’ album for Sony Classical.

The album EPK can be found here.